On the Aiguille du Midi’s closing day last Sunday, Alex and I decided to head up for one last day hit. Our chosen route was Le Temps est Assassin (Time is as an Assassin) on the Triangle du Tacul, an ominous sounding name for a route we hoped to get done in time for the last lift back to town!

It would be fair to say that neither of us had this route on our “must do” list, but aside from being easy to get to and from, it also looked like it could offer some fun and challenging mixed. Having now climbed the route, I’d say it was our mistake not to have the route on our lists! The route is excellent, offering fun, varied and sustained climbing from start to finish. Having climbed ten routes on the Triangle, I would say this is by far the best. For those now searching around for their copy of Snow, Ice and Mixed, be warned though; the route is rarely fully formed and is therefore typically far harder than the II 4 Damilano gives it. In full dry conditions it goes at a stiff M6 / Scottish VIII. In the conditions we climbed it, which were on the dry side but not atypical, it went at around M6 / Scottish VII.

Below are a few photos of the line which will hopefully get you psyched to give it a go! If you do go for it, I highly recommend you use Morgan Baduel’s topo (click here). It is far more useful than the one you’ll find in Snow, Ice and Mixed.

Alex on the first pitch (30m, M5). Never too steep, the climbing is mostly technical and serves as a good warm-up for the difficulties ahead.

Alex on the super aesthetic second pitch (30m, M6). The second pitch is really the money pitch, a beautiful corner with a fist-sized crack at the back of it and blank walls either side. The climbing here gets notably harder and good gear is sparse. Thankfully there are two bolts on your left, though I wouldn’t want to think about the fall you could take if you fell off the crux moves at the top.

Alex working through the crux. The corner starts off relatively easily with good ice to march up. However, this ice soon starts to thin until it disappears altogether, forcing you to search for tiny edges and small crystals on the sides in order to progress upwards.

After a moderate-angled but technical pitch (20m, M4+), there’s another stunning ribbon of ice and mixed to climb (40m, M4+). Never too hard, it’s great fun in an awesome position with sustained, interesting climbing.

There are a couple of different ways to finish the route. We chose to climb a short wall straight above the belay then traverse rightwards, which involved some delicate slab moves (30m, M5). After this the fun was sadly over. This was probably for the best though as it wasn’t long until the last back to town. Three 60m rappels down the Chèré Couloir took us back to where we started and the usual slog back home via the Midi arête. 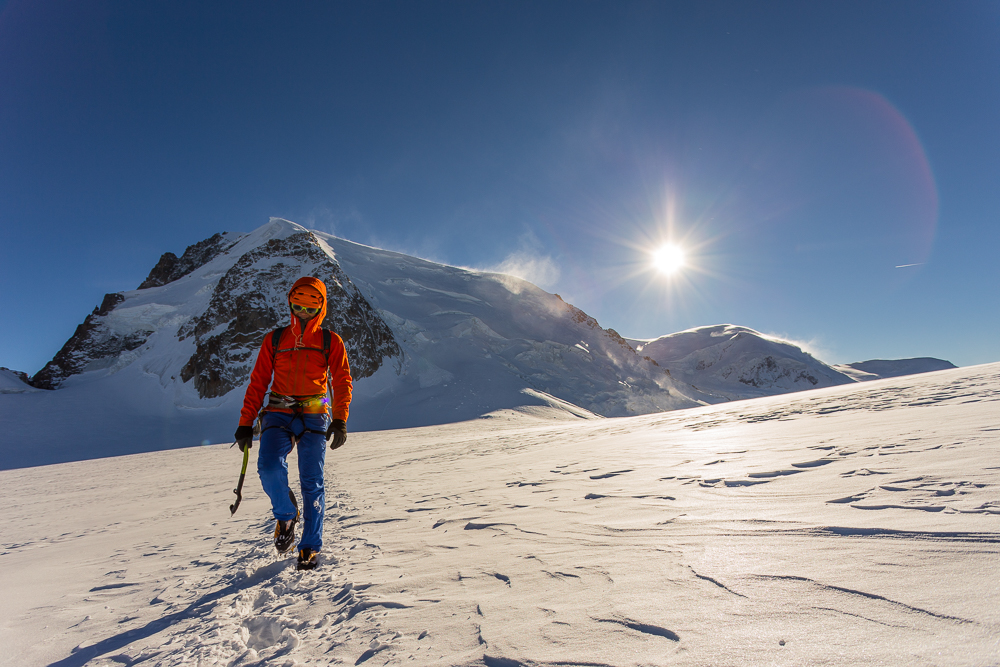