Psyche was high. Once again Dan and I had a winter ascent of the Dru north face on our minds. The forecast was perfect, the face in bon con and our skills hopefully up to the task. Then the inevitable happened. Our old adversary, the wind, had decided he was going to visit Chamonix. The faible vent the forecast had promised had morphed into fort vent. Putaaaan! As we sat in a hot, sunny Chamonix debating our options it was tempting to go ahead regardless. A bit of wind never hurt anyone. Sadly common sense prevailed. We scratched our heads, trying to come up with a decent alternative. After chucking about a few ideas, I remembered that a friend had recently made a winter ascent of the Frendo Spur. The Frendo is a Chamonix classic that winds its way up the north face of the Aiguille du Midi for 1200m. Usually it is climbed in summer and though long is of relatively moderate difficulty. It’s rare that teams attempt to climb it in winter. Though we had both climbed the route in summer we knew a winter ascent would be a different kettle of fish and weren’t sure what to expect. Nevertheless, we were both psyched to give it a go and confident that one way or another we would get to the top before the strong winds arrived. We packed our bags with food and gas for one bivi and agreed to meet the following morning for the first lift to the Plan de l’Aiguille. 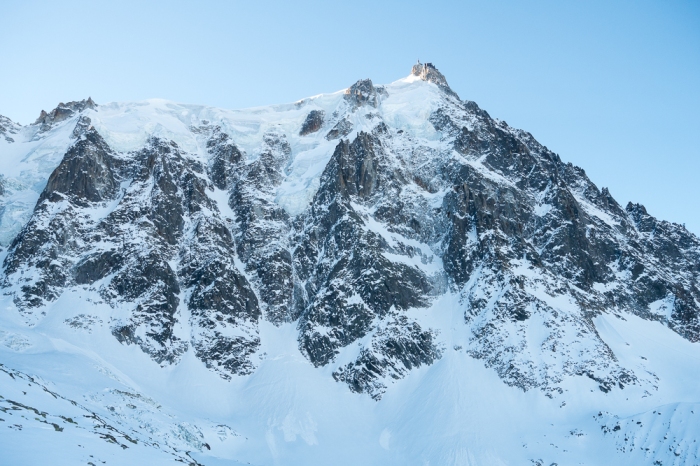 The Midi north face. The Frendo takes the prominent rocky spur in the centre of the photo before finishing up snow and ice slopes. At the highest point on the ridge you can just make out the Aiguille du Midi cable car station.

At 9 a.m. we left the Plan de l’Aiguille lift station and its crowd of tourists and eager skiers. The hot weather of the past week had compacted the snow, making the approach to the base of the spur quick and easy. The only difficulty was trying to keep Dan focused on the route.The base of the Midi’s north face is prime hunting ground for belongings that have made the long journey down from the Midi arête and Dan was eagerly acquiring himself some new gear. After debating which pieces of gear we would bring with us, we changed focus back to the route and crossed the bergschrund. 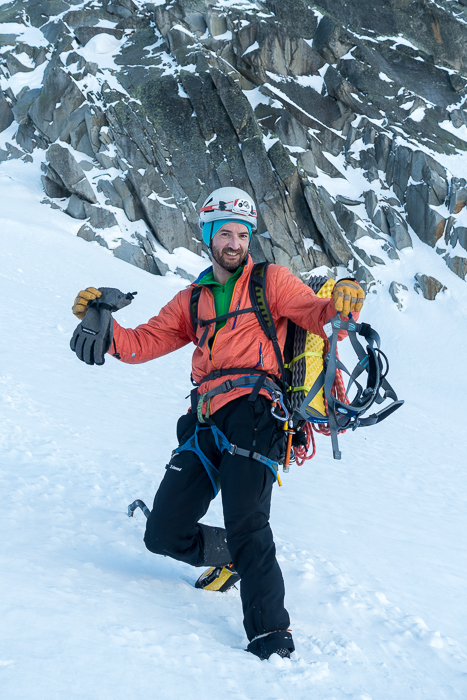 Dan and some of his spoils.

Once on the route we made quick progress up the lower ramps. If anything the route was proving to be easier in winter than in summer. The rocky lower slabs were replaced with simple snow slopes. Soon though we got into the route proper and the difficulties started to appear. Some short mixed steps led us through to the first crux, the ‘râteau de chèvre’ (a Google search will explain all). Balancey laybacking up a slanting crack brought us to a knife-edge arête, which I straddled and gracelessly shuffled along. Dan followed with significantly more style. The first crux now out the way, we carried on up. We chose the obvious line of weakness, weaving our way up snow ramps, gullies and brief rock steps. It was all proving to be easier than expected. We soon however arrived at the base of the crux pitch, from where we knew the climbing would become more difficult. 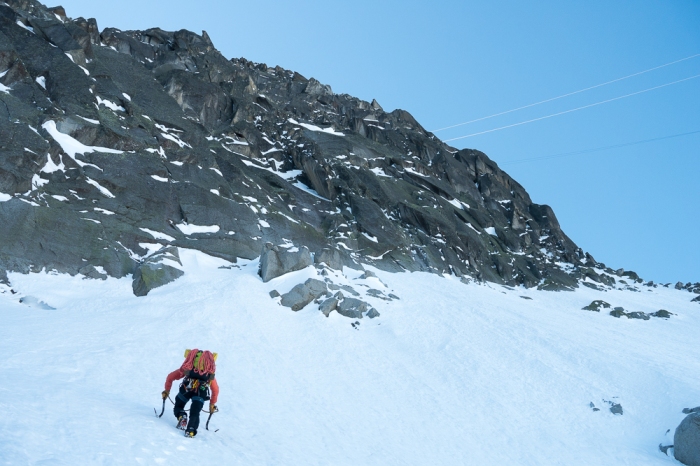 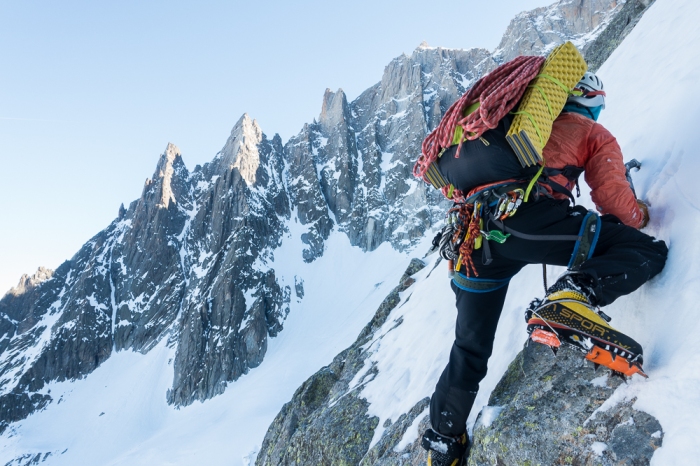 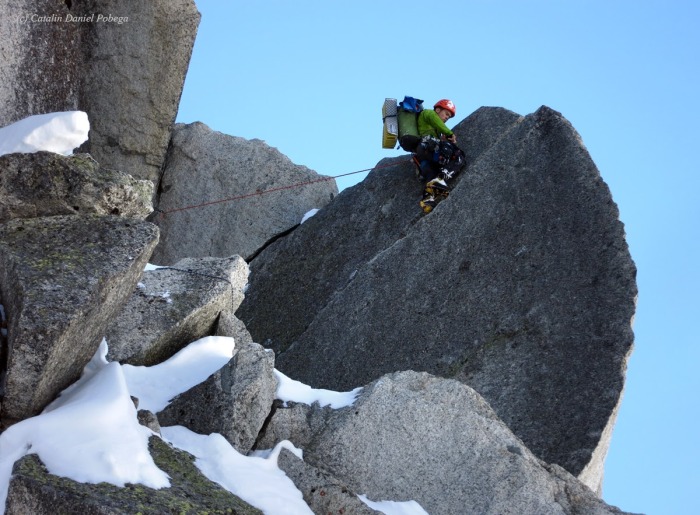 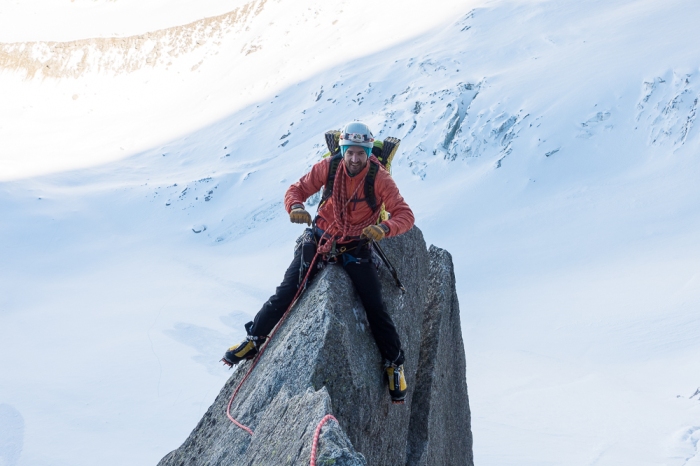 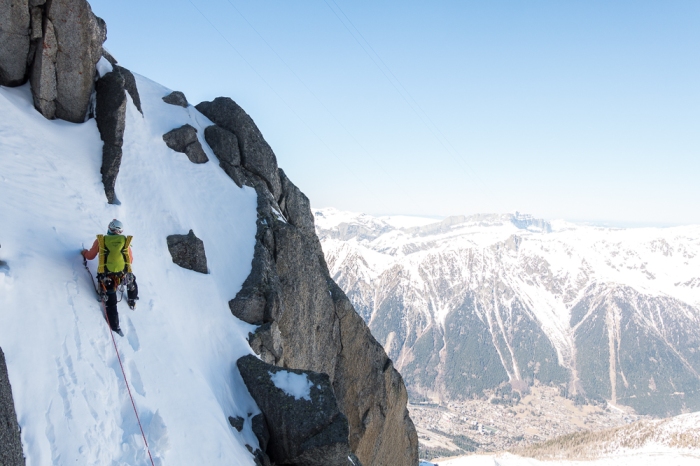 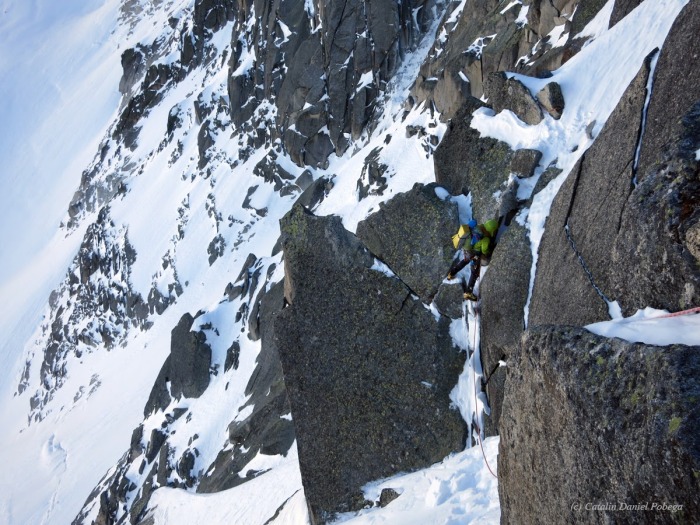 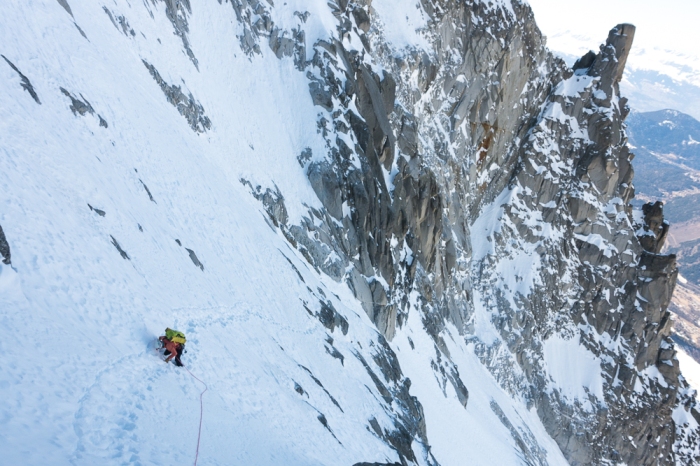 The ground above looked less steep than I remembered, but there were certainly no dribbles of ice to aid our progress. I got stuck into the pitch, not sure what I would encounter. Torques, hooks and the occasional thuggish udge led me up higher. To my pleasant surprise I found the pitch climbed just as well with ice tools as it did in summer. It was sustained, but never desperate and had solid gear all the way. I soon found myself no longer hoping to finish the pitch but instead willing it to continue, not wanting the fun climbing to end. Forty five metres later I heard Dan shout up that I was short of rope and I reluctantly stopped to make a belay. I looked at the ground above, hoping the rest of the climbing would be just as good. 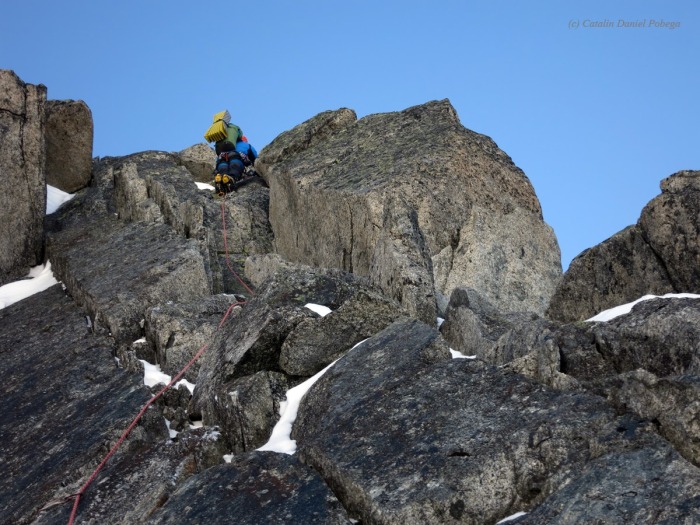 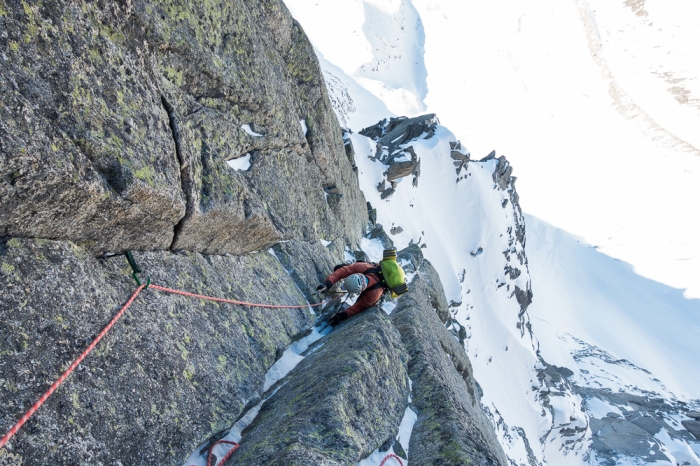 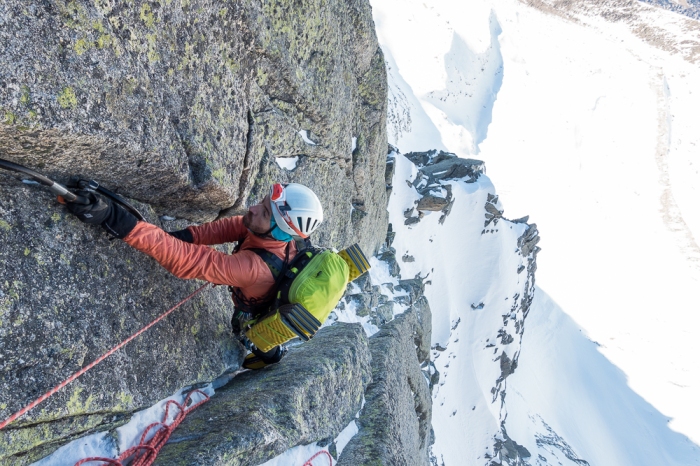 Dan took over for the next stretch. Optimistically I suggested we take a few coils and start moving together. Dan wisely thought better of this idea. In summer, the climbing after the crux generally gets easier. We soon found out that this is not the case in winter. The positive hooks and edges we’d found on the summer crux soon petered out. Instead they were replace with baggy torques, smooth slabs and thin edges. The climbing was tricky, but it was also exceptionally good and varied, requiring the full range of mixed techniques. One moment I’d be on a thin slab, each point seemingly on nothing, the next moment torquing up a perfect crack before romping up a wall on sinker hooks. Each pitch was better than the last and with bivouac gear on our backs it felt great to be able to enjoy the climbing without the stress of toping out before nightfall.

After a physical fight up a wide crack, which turned out to the be the crux of the day, I took over the lead. Darkness was approaching but I could sense the end of the spur was not far. Once again setting off into the unknown, I followed what I guessed was the line of weakness, occasionally downclimbing the odd step after veering onto blank slabs. As I turned a corner, I heard Dan shout up that I was about to run out of rope. This time I kept going. Though the climbing was still sustained and technical, I was confident that Dan would not fall and we could move together. A few moments later I broke out left and up above me saw the iconic snow arête that would guide us to the summit. I let out an excited scream, proud to have the route in the bag but also sad that the quality mixed climbing had come to an end. As the sun dipped below the horizon Dan joined me on a snowy flattening at the top of the spur. Though the comfort of the Aiguille du Midi lift station was just a few hours of easier climbing above us, we were both happy to stop for the day. We had a perfect bivi site and after a long day we were not inspired to tackle the dry upper ice field in the darkness of night. 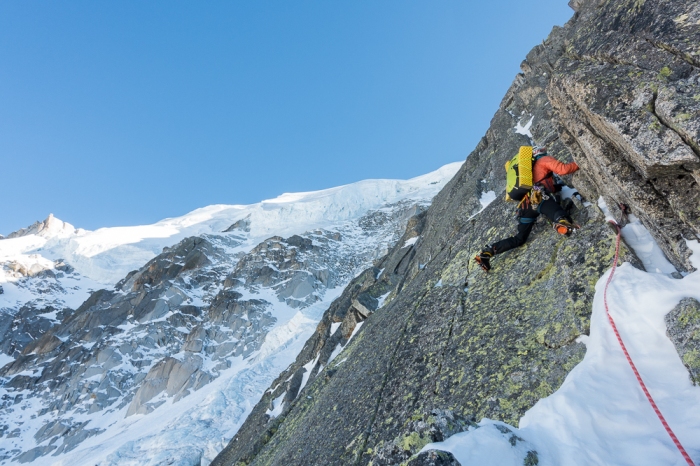 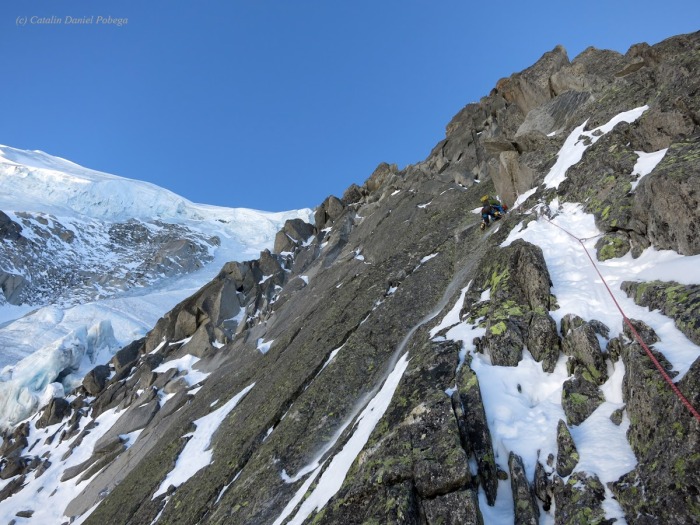 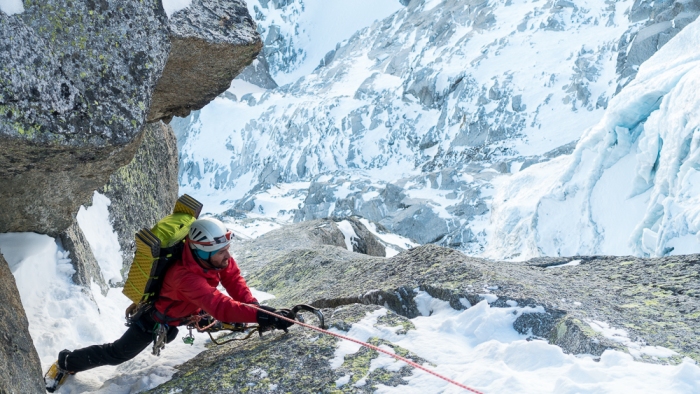 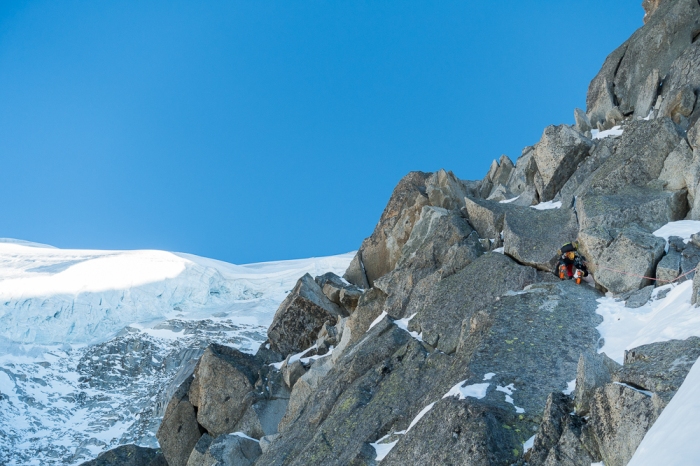 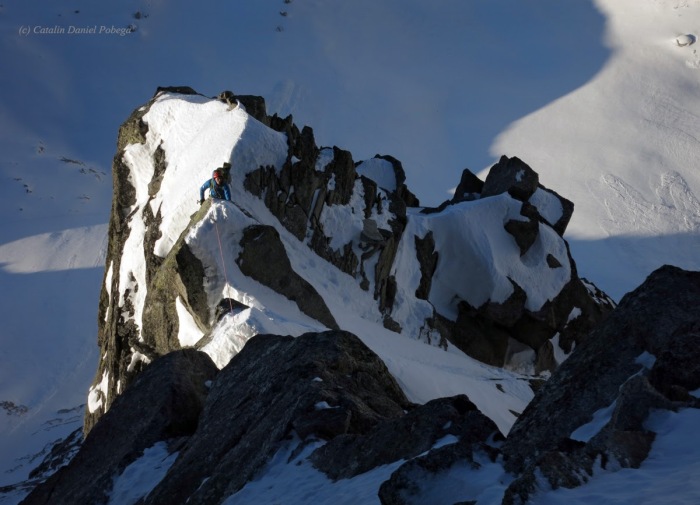 We settled in for the night and started to eek out some hot water from our stove. The site was as good as we could hope for. Spacious, flat and not a breath of wind, not that this helped us sleep well. As is always the case, we both had a fitful night’s sleep, inevitably only starting to doze off once the sun rose and it became time to move again. We were slow to get going in the morning, not only because it was hard to leave the warmth of our sleeping bags but also because to our surprise a Slovenian team had also chosen to climb the Frendo. They had trailed a couple of hours behind us the previous day and were now situated at another bivi site shortly above us. We decided to offer them the chance to lead the way on the final ice slopes (and in doing so smash out some helpful placements in the dense glacial ice). Eventually they got going and we packed up our stuff, ready to follow. My old mountaineering boots, long past their best, had frozen stiff during the night. Putting them back on was an ordeal, only made possible by thawing them out over our stove. 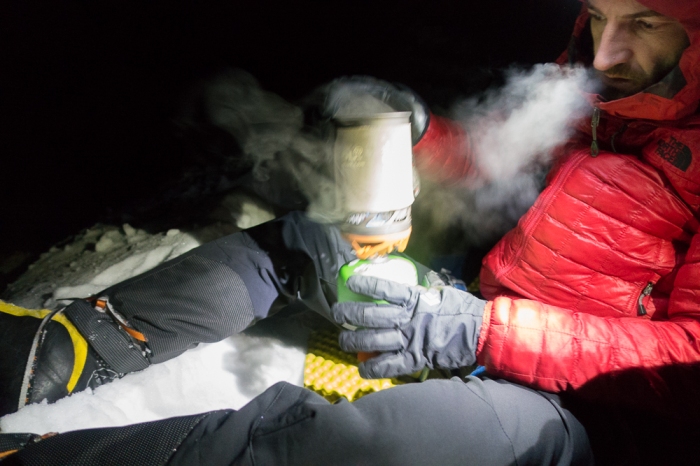 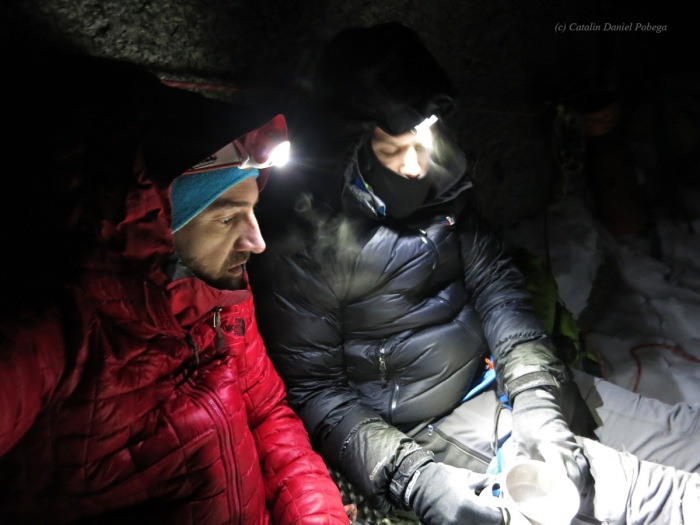 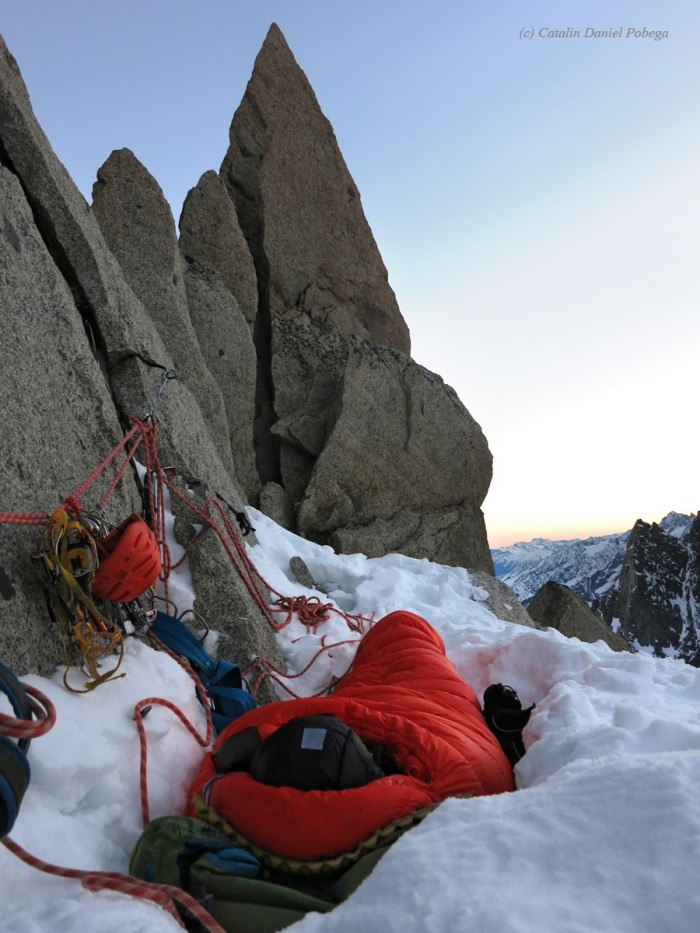 Sunrise at our bivi site. About as ideal a spot as you could wish for. 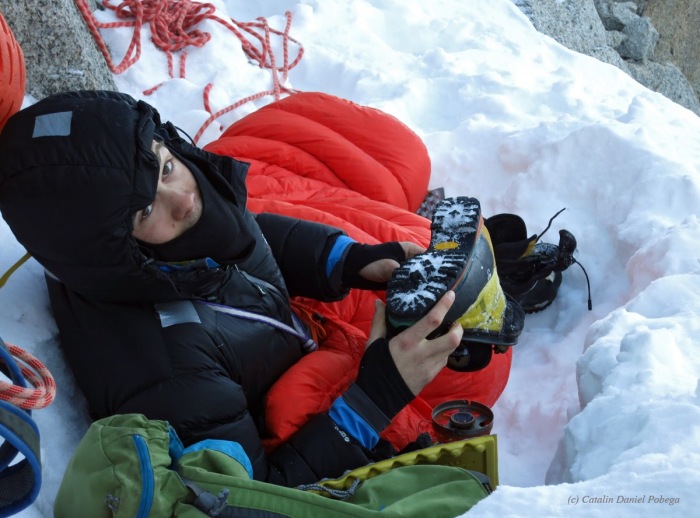 Thawing my boots out. I would come to regret my choice of footwear and general boot/sock management.

The final ice fields went more smoothly than expected. The passage of the Slovenians had greatly helped, creating small pockets in which to place our tools and crampons. We were grateful for their hard work and before we knew it we were approaching the final summit arête. Breaking through a small lip onto the arête was a bizarre experience. After the solitude of the past two days, I was greeted by over a hundred skiers ready to begin their descent of the Vallée Blanche, a classic off piste ski route. Once again I was immersed in the chaos and crowds of Chamonix. 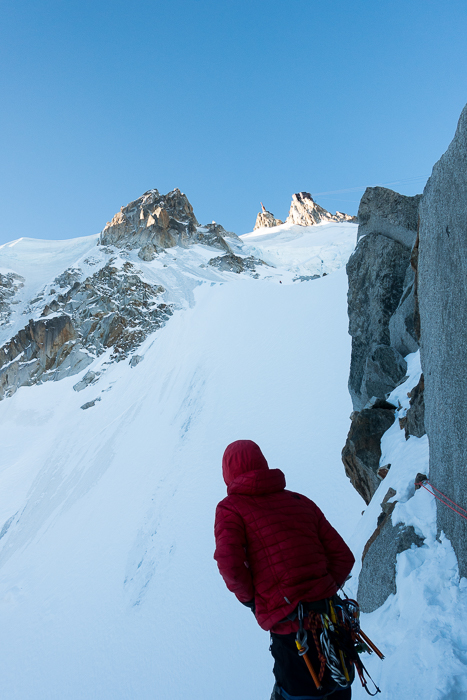 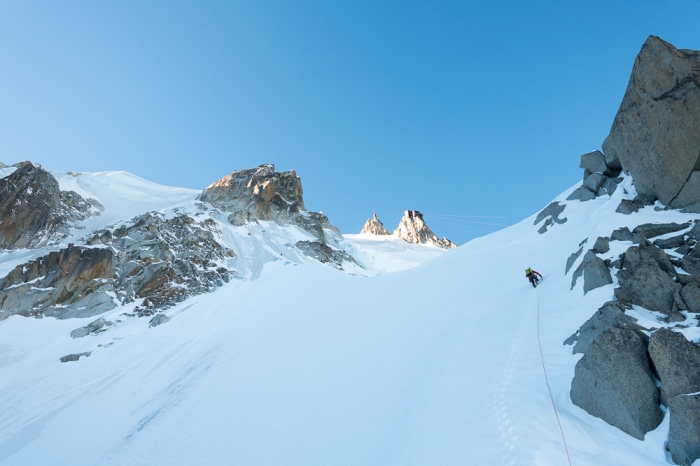 And off we go… 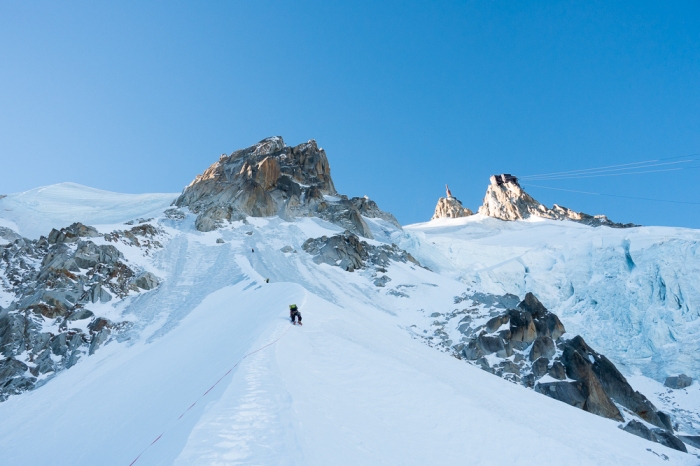 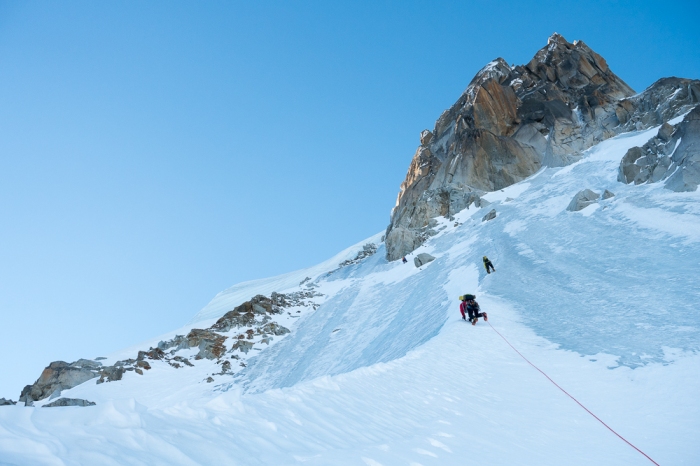 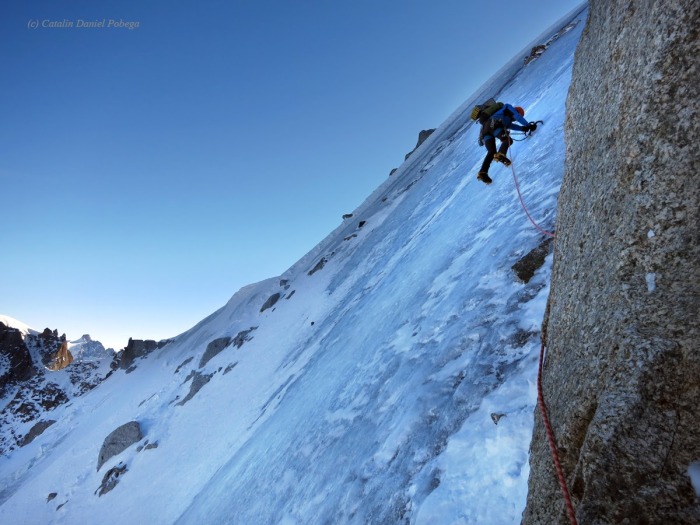 As Dan climbed the final summit slope to join me, I observed the spectacle in front of me. A French guide shouted hysterically as his client skied dangerously close to the north face. Another skier lost control, narrowly missing us as they crashed down the arête. In a way, I felt at more danger now than I had at any point on the climb and I was keen to get away from the crowds. After a brief moment to let the achievement sink in, we started up the snowy arête towards the Aiguille du Midi lift station and our speedy cable car descent. This would prove to be the final crux, with dozens of eager, cramponless skiers doing their best to obstruct our passage as they slipped and slided down in the opposite direction. Finally we stepped into the lift station and the route was over. As we got the cable car back down to town, it felt good to get that rare feeling for the obsessive climber – contentment. I felt no desire, no need to go climbing or indeed do anything. All I wanted to do was rest and relax. No doubt this feeling will not last long. That Dru north face still calls out to us… 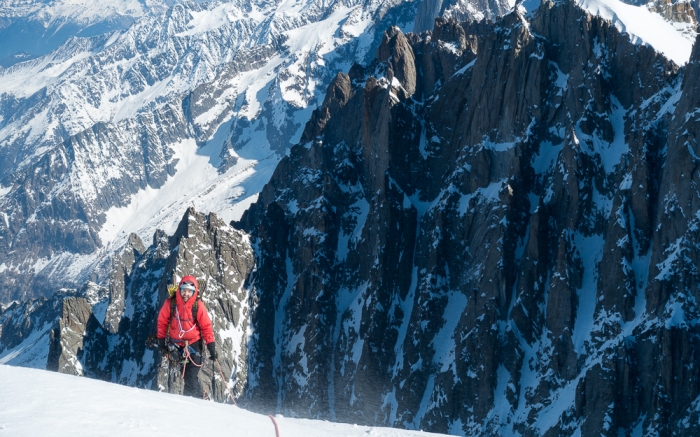 Dan topping out onto the Midi arête and into the chaos of prime Vallée Blanche season. 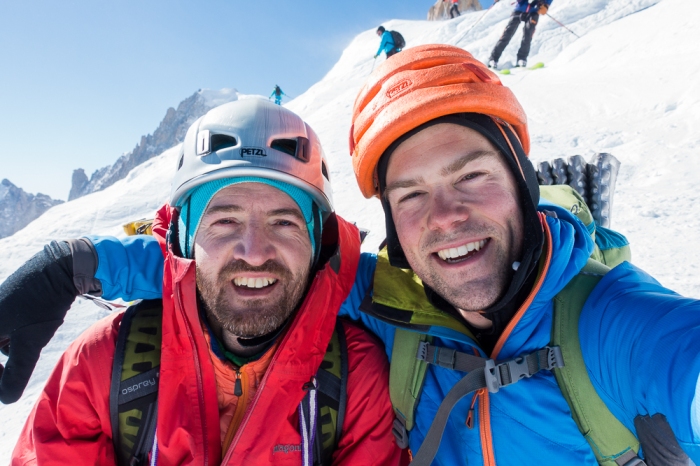 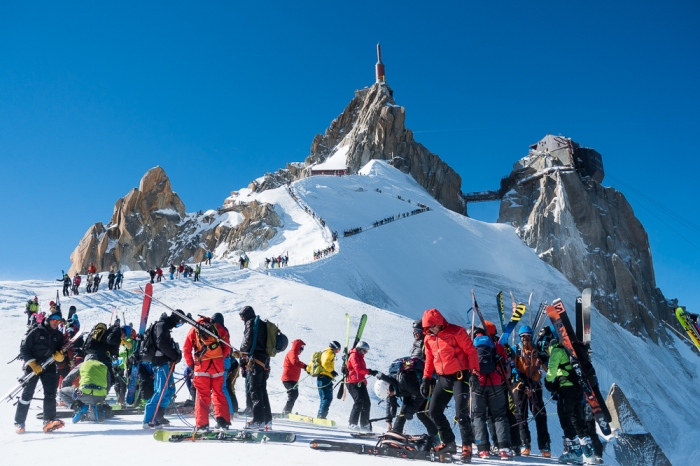 10 thoughts on “Winter on the Frendo”